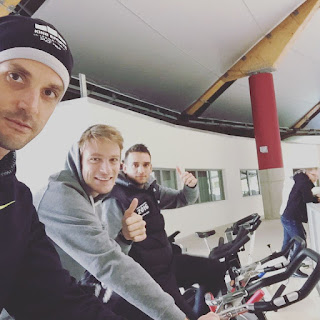 I'll keep this one short and sweet!

After the 2014 Winter Olympics, i had fulfilled my Olympic dream of crossing over from Inline Speed Skating and what i knew for the past 20 plus years to ice Speed Skating. I finished 7th in the 10,000 meter and while that was a great result from where i'd started (not even being able to stand up on ice), i knew in my heart that i had more to give!

So late last year i spoke with my wife and toyed with the idea of a "come back". I had some injuries i had to over come and with the help from the best in the business Ian King he had me doing things with my body that i was never able to, EVER before!

It wasn't until April this year 2016 that i decided to 100% commit myself to skating again! My body feels good and what i have learnt over the past few years with nutrition, supplements and ways to look after my body there really isn't anything holding me back.

So with these two guys, Peter Michael and Reyon Kay also from NZ, not only are they my team mates but my friends also. I couldn't think of any other skaters i'd rather be on this road with.

So my journey starts here!
Posted by Shane Dobbin at 11:19:00 AM No comments:

Written by T Dobbin
After spending a week in Inzell, Germany Shane travelled Tuesday to Heerenveen, The Netherlands for today's World Cup Finale 5,000 meter. With this weekend being the final hit out before the World Single Distance Championships in Inzell, Germany it will be only in the end result to know whether everyone will be skating 100% or holding back for the Worlds.

Shane is paired with fellow ex-inline skater and Frenchman Alexis Contin in the sixth pair of today's men's 5,000 meters. See the following link for full pairs of today's races: http://live.isuresults.eu/2010-2011/Heerenveen3/

Some of you may be able to view today's races online at http://schaatsen.nl/wc-finale/live

Tomorrow morning, Shane will then be flying back to Inzell for his final days preparing for the World Single Distance Championships. keep posted for results coming soon!
Posted by Shane Dobbin at 8:23:00 PM No comments:

Written by T Dobbin
Well it's been some time since an update has been posted on Shane's blog. This winter has gone by so fast it's hard to believe there are only two races to go and it's soon to be March.

Since the World Cup last November in Berlin, Shane has been progressing this winter and trying to make a step up from last year. It hasn’t been an easy step to make, but over the past month things seem to be coming together after a really good training period throughout December and January.

Hamar in November, the third World Cup of this season was a great step for Shane. He raced the 10,000 meter race and managed to set a new personal record, New Zealand National record, as well as finishing the World Cup with the fourth best time of the day. It was a great way to finish off the three first World Cups of the season and after his disappointment in the first two. After Hamar Shane was ready to head back to Salt Lake City and get stuck into hard training.

On Shane’s return to Salt Lake City, he was able to sit down with his Coach/father Roy Dobbin to lay out training for the remainder of the season and get back on track for the season’s goal, the World Single Distance Championships. Shane’s brother, Kalon Dobbin was in Salt Lake City upon Shane’s return and helped him with his sprint training as well as his general conditioning.

Over the month of December, Shane set new personal records in the 500 meter, 1000 meter and 1500 meter distances, as well as set a seasonal best in the 5,000 meter. The next step for Shane was to try to qualify for the World All Round Championships at the regional qualifier held in Salt Lake City mid-January. It was going to be tough for Shane as in the past has lacked a sprint, but Shane put together some good times at the regionals and ended up finishing in fourth place overall, setting another season’s best in the 5,000 meter as well a spot on the podium in second, and a personal best and national record in the 10,000 meter at the Regionals and winning the final event of the weekend. For full results of the Regional Qualifier go to: http://www.speedskatingresults.com/index.php?p=2&e=5760&s=14253 These superb results confirmed his spot to start in the World All Round Championships in Calgary in February, which meant he was able to set a time in Calgary for the World Single Distance Championships and not have to travel to Moscow, Russia for the World Cup there in late January. 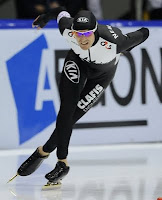 The World All Round Championships were still another month after the Regionals so it was back into the training and use the All Round and the Final World Cup in Salt Lake City as stepping stone to prepare for the final part of the season. Luckily for Shane his coach/father was able to travel from New Zealand to Salt Lake & Calgary to be able to help with the final phase of his training. In Calgary, Shane had an unexpected successful weekend setting three new personal records and National records as well as finishing 5th in the 5,000 meter, 4th in the 10,000 meter and finally 9th overall. For full results from the World All Round Championships go to: http://www.speedskatingresults.com/index.php?p=2&e=6193&s=14253

From Calgary, we flew directly back to Salt Lake City where the focus was on the 1500 meter to try to confirm a position in this event at the World Single Distance Championships. Racing was on Friday and Saturday with the first event being the 1500 meter. Shane managed to skate yet another personal record and National record in a time of 1.46,19s, just slipping through the qualification status in 23rd and out of 24th places for the World Singles.

Finally racing Saturday morning, in the 10,000 meter Shane was pair with Norwegian Henrik Christensen. Shane skated his best 10,000 meter yet, skating a very “flat race” with consistancy each lap and once again, setting another National record and personal best time beating his time from last weekend in the 10,000 meter with a time of 13.04,36s which placed him the 6th best time of the day. For full results from the World Cup in Salt Lake City go to: http://www.speedskatingresults.com/index.php?p=2&e=6276&s=14253

For the official website for the World Single Distance Championships go to: http://www.inzell-wm2011.com
Posted by Shane Dobbin at 2:46:00 AM No comments:

Shane is Proudly Supported by

Born and raised in Palmerston North, New Zealand, Shane started his sporting career as an inline speed skater and is currently four times World Champion. In 2008 Shane decided it was time to change his life and is now focusing his sporting life on Ice Speed Skating. Shane represented New Zealand in the 2010 Olympic Games in Vancouver finishing 17th in the 5,000 meter and continued into the next Winter Olympic Games in 2014 in Sochi, Russia where Shane finished in the 7th in the 10,000m. Shane was the New Zealand Flag Bearer at the 2014 Winter Olympic Games Opening Ceremony, in which to date is one of his greatest sporting moments. After Retiring in 2014, Shane spend the next two years living some what of a "normal" life. Dreaming of putting his skates back on and fulfilling his Olympic dream was definitely in his future. After many years on injuries Shane went to see the best in the Business who managed to have him back on his skates within four weeks and back training again! So twelve months ago the "come back" was committed too and now Shane is training to qualify for the 2018 Winter Olympic games in Korea. Read more

Where ever there is ice for the remainder!

"I hated every minute of training, but I said, 'Don't quit. Suffer now and live the rest of your life as a Champion.'" - Muhammad Ali